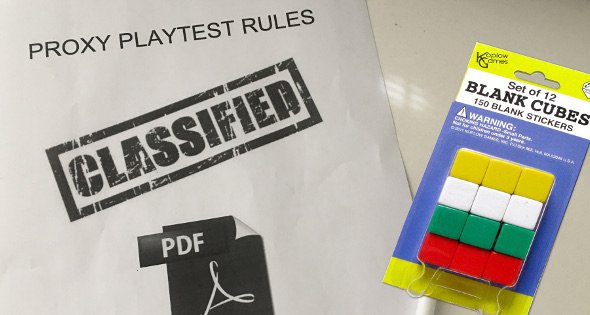 As the first playtest approached, my stomach was in knots. It’s one thing to create in a vacuum, but it’s quite another to put an unfinished version of Proxy in front of civilians and ask for feedback. And, yes, before you say anything, I know that’s how this kinda’ thing is done. That doesn’t change the fact that our hearts were on the table. I was confident that we were on the right track, and I’m even more sure now.

But, you never know ‘til you know.

On the night, sitting at a table flanking some dear friends, who aren’t afraid to tell us the unfiltered truth, all we can do is lurk. Staring at them with giant, expectant, doey-eyes. The game is bare bones. No art, no real anything other than handwritten cards, custom dice, and a PDF rulebook. Lean and mean.

It was by no means a flawless victory. The things that need tuning were striking and unmistakable. We need to tweak some math and change a couple of things for feel and player experience. Monsters are too powerful. Players are too weak, and we still have a timer mechanic to dial in. But, the foundational stuff like tile setting and dice mechanics work. Basic gameplay was easy to understand, and players took to it immediately. I’d say we’re two or three of these away from locking down all of the mechanics.